COMMUNE WITH NATURE in this tiny little town off the beaten path.  Most people don't know CAPE MEARES is here, even when they drive right by it on Three Capes Scenic Route.  The road makes a turn and bypasses the town altogether.  Yet tucked away at the foot of Cape Meares' headlands is a closeknit community of "just folks" who love to be hidden away in the woods between the forested state park and the 5 miles long Bayocean Spit. 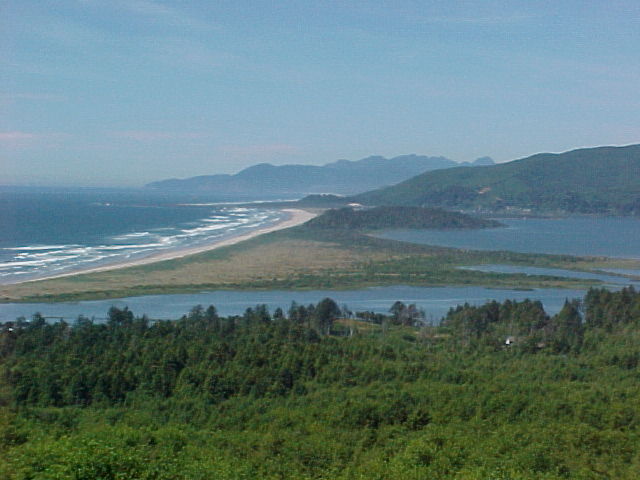 BAYOCEAN may sound familiar, but forget about buying a home there.  This was a popular beach resort town in the 30's through the 50's.  To reach it, one had to travel by boat or plane because there was no road to it.  Then when the North Jetty was built at the entrance to Tillamook Bay, the waves were redirected and scoured away the beach in front of the town of Bayocean.  What the ocean didn't subsequently wash away was picked up and moved - at least a few homes made it to nearby Cape Meares, including the beautiful Pagoda House now painted bright blue located at 3rd & Pacific.

OCEANFRONT homes along Cape Meares beach are rarely sold, but just about every home in Cape Meares is within a few easy blocks to the same long beach.

RURAL settings are common here, and with the recent zone change to 2 acre minimum, it's likely the nature of Cape Meares will stay rural for a long time to come.

NO COMMERCIAL establishments here at all.  And that's what the residents love about it.  The lake at the entrance to the town is a freshwater lake which is stocked with trout.  There are trails through the woods where one can hike all the way up to Cape Meares Lighthouse with stunning oceanviews along the way.

FIND CAPE MEARES by continuing West on Bayocean Rd from Tillamook, and just keep driving till the road ends at the ocean --- and you will be in the heart of Cape Meares.